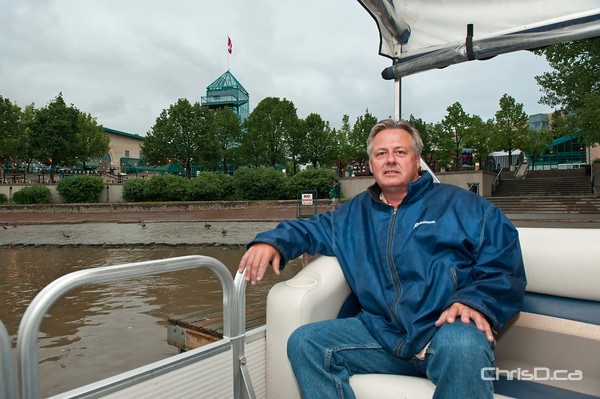 Gord Cartwright, owner and operator of the River Interpretive Boat Tours at The Forks, is keeping busy this summer season shuttling around tourists wanting to learn more about Winnipeg's history. (TED GRANT / CHRISD.CA)

As river levels continue to remain high at The Forks, a local boat tour operator is adjusting to the circumstances.

Gord Cartwright, who owns and operates the River Interpretive Boat Tours on the Red, Assiniboine and Seine, has constructed a loading dock meant to accommodate changing water levels. The structure can be torn down and reconfigured in less than an hour.

While the river taxi isn’t running this season due to higher than normal water levels, Cartwright’s half hour guided tour — now in its 19th year — touches on the history behind the Manitoba legislature, St. Boniface’s French quarter, the Exchange District and historical background on the fur trade, local waterways and Aboriginals.

Cartwright says it’s not just tourists hopping on board, but locals wanting to rediscover their own city.