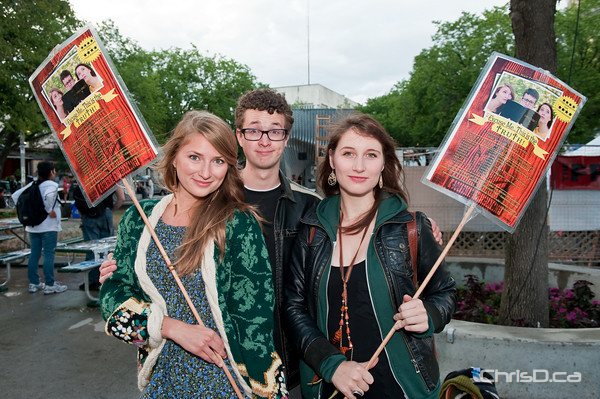 Performers with the Edmonton-based troupe "Excuse Me This is the Truth" promote their play at the Winnipeg Fringe Theatre Festival. (TED GRANT / CHRISD.CA)

More than 9,500 tickets were sold to indoor performances during the 24th annual event, stretched over the span of 10 days.

There were 121 sellouts and $630,029 in box office revenue returned to performers.

The 24 venues helped produce 1,201 performances, as well as bands, buskers and street performers in Old Market Square and throughout the Exchange District.

“This year’s festival was a bit like walking a tight rope,” festival producer and ringmaster Chuck McEwen said in a release. “We started off strong, beating our record for opening day attendance, and followed that with a record-breaking weekend.”

Social media was also credited with helping spread the word this year. The Fringe Festival was trending locally on Twitter before it even started, as visitors shared reviews and photos with other patrons.