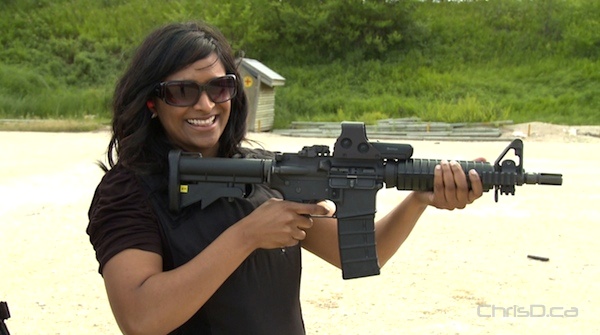 Meera Bahadoosingh, as seen in this screen grab from a segment surrounding the WPS Tactical Support Team. (SHAW TV / HANDOUT)

Meera Bahadoosingh — one of the city’s best known television reporters and storytellers — is putting down her microphone for a set of handcuffs.

Bahadoosingh will leave the local media scene to embark on a new career in law enforcement after being accepted into the newest class of recruits for the Winnipeg Police Service.

“It’s been such a long process… can’t believe it’s finally happening!” Bahadoosingh said in an e-mail to ChrisD.ca on Tuesday.

She will leave her present position at Shaw TV Winnipeg, where she has worked since late 2009. Before that, she was a reporter at Global Winnipeg since 2005.

“It’s sad to say goodbye to a career I’ve loved… but looking forward to a new adventure.”

Meera will begin her police training in the fall.