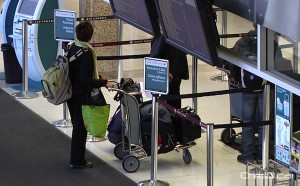 Passenger traffic was down at Winnipeg’s James Richardson International Airport during the second quarter of 2011.

The Winnipeg Airports Authority released new data Thursday, showing a decrease in the number of people that passed through the airport terminal up until June 30 — at 811,620 passengers. That’s down 1.4% compared to the same period in 2010.