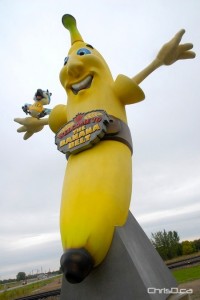 The town of Melita is getting ready to celebrate the first birthday of two of its most famous citizens.

Sunny the Banana and Breezy the Blue Jay — the giant banana and bird that greet visitors when they enter Melita — were installed one year ago and instantly became a hit with locals and out-of-towners alike.