Home » Entertainment » Tour the World in 14 Days at Folklorama

Tour the World in 14 Days at Folklorama 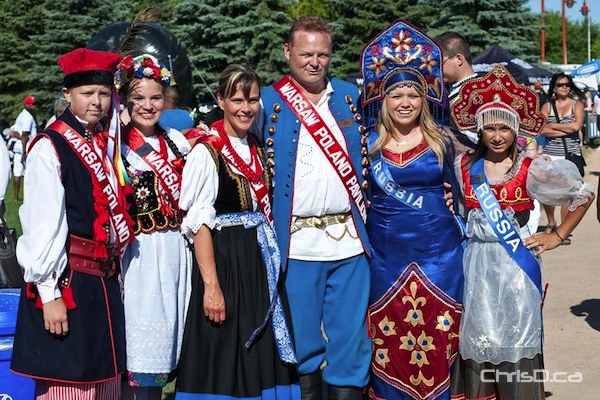 Ambassadors with the Warsaw Poland and Russia Pavilion assemble for the opening ceremonies of Folklorama at The Forks on Saturday, July 30, 2011. (TED GRANT / CHRISD.CA)

The official kick off to two weeks of worldly culture, food and entertainment got underway Saturday as Folklorama launched at The Forks.

Visitors were treated to an early taste from a variety of the 46 pavilions offered this year, including performances from the Brazilian, Irish, Chinese and Indo Caribbean Pavilions, among others.

This year, Folklorama is celebrating 42 years of cultural diversity in Winnipeg, and has even added a few new destinations to its lineup. New this year is the Brazil Carnival Pavilion, Punjab Pavilion and Spirit of Ukraine Pavilion.

After a brief absence, two pavilions are returning for 2011, including the Indochina Chinese Pavilion and Japan Pavilion.

Approximately 20,000 people flocked to The Forks for Folklorama’s preview show, which included a stunning fireworks display.

“What a great night with a record number of people,” said Folkorama president Mohamed Ismath. “We are very excited for Folklorama to start and are confident this will be an absolutely fabulous festival.”

Folklorama runs July 31 to August 13. For a list of pavilions and showtimes, visit Folklorama.ca. Also don’t forget to download the new Folklorama smartphone app to stay in the loop surrounding this year’s festival.