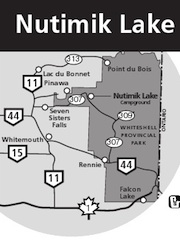 The Nutimik Lake campground in the Whiteshell area, along with surrounding cottages, was evacuated Monday after a forest fire broke out.

A Manitoba Conservation officer spotted the fire shortly after 11 a.m., which officials say covered roughly a third of a hectare of land.

A helicopter and water bombers were called in to extinguish the blaze, and had it under control in a few hours.

The evacuation was only precautionary, and cottage owners and campers returned by about 2:30 p.m.

No word on what led to the fire.