NBA’s 3-on-3 Tournament Coming to The Forks 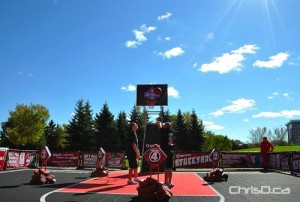 Amateur basketball players hone their skills at the NBA Jam Session at The Forks in this September 18, 2010 file photo. (MAURICE BRUNEAU / CHRISD.CA)

A free interactive basketball festival is touring Canada this summer and will stop in Winnipeg from August 13-14.

The two-day NBA Jam Session at The Forks is visiting six cities for the 3-on-3 all ages tournament.

“Jam Session’s inaugural tour last year attracted a large number of basketball fans and we are excited to bring the event back as we look to further grow basketball in Canada,” said Dan MacKenzie, GM of NBA Canada.

Registration is now open for players aged 13 and older. Finalists in the 19+ category in each city will compete against each other in the Canadian National Finals at the last tour stop in Halifax.

To register a team, visit NBA.com/jamsession.