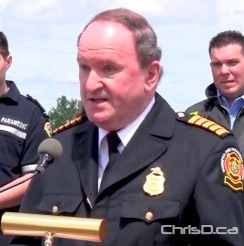 In a statement, the United Fire Fighters of Winnipeg thanked Brennan for his five years of service.

“During his watch the Winnipeg Fire Department has been greatly enhanced,” the statement read. “There has been a good working relationship between the union and the administration and we now have fire fighter paramedics to provide even better EMS service to the citizens of Winnipeg.”

A replacement for Brennan hasn’t yet been named.