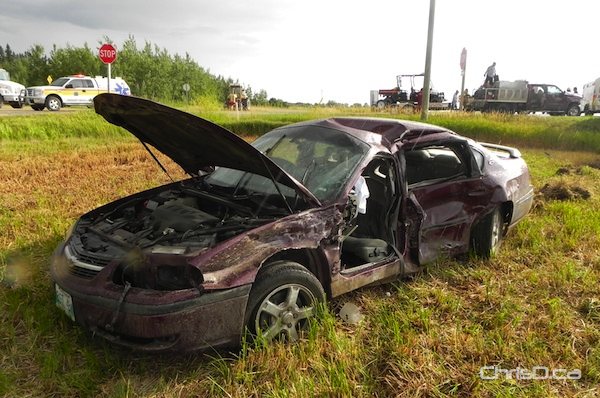 A Chevrolet Impala was broadsided by a fire truck in the RM of St. Clements on Monday, August 8, 2011. Two occupants in the car were taken to hospital, including a passenger in the fire truck. (RCMP HANDOUT)

A fire truck on its way to an emergency call in the RM of St. Clements collided with a vehicle late Monday afternoon, sending three people to hospital.

RCMP say the accident between an East Selkirk fire truck and Chevrolet Impala happened at about 5:45 p.m. on Highway 59 near PR 212.

The truck was travelling eastbound at the time of the crash, attempting to cross the highway when it collided with the driver’s side of the northbound Impala.

A passenger in the fire truck was taken to hospital with minor injuries. The driver of the truck wasn’t injured.

The investigation into the crash is continuing.