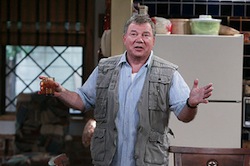 Shatner will perform at the Centennial Concert Hall on October 25 as part of his How Time Flies tour.

The “Star Trek” icon will sing and share his life and career with the audience as part of the cross-country excursion.

Tickets for the show range in price from $79 to $129 and go on sale Friday at 10 a.m. through Ticketmaster.