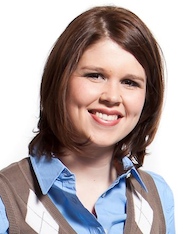 CTV Winnipeg has attracted yet another member of the local media to jump ship.

The Altona native currently handles web and traffic reporting duties on “Breakfast Television,” where she’s worked since 2009. Prior to that, Batchelor was an anchor at the now defunct CKX in Brandon.

“She’s thrilled to be joining us,” a CTV source said.

Viewers can still catch Megan on BT until next Friday. Her first day at CTV will be Monday, August 29.