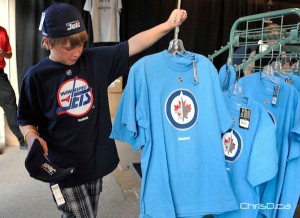 Winnipeg Jets fever was thrown into overdrive on May 31 when True North Sports and Entertainment announced the eventual return of the city’s beloved sports franchise. Since then, fans can’t get enough of the new NHL team, which has yet to officially hit the ice.

All that momentum that sold out season tickets for the next several years in a mere 17 minutes is also fuelling a number of illegitimate and questionable ticket sales online.

One website in particular was trending on Twitter Wednesday, with locals eyeing the opportunity to purchase single-game tickets. The downside? Extremely inflated prices and a not-so-professional looking marketplace.

The site in question promotes 2011-12 regular season and pre-season tickets to not only MTS Centre, but other venues where the Jets are scheduled to play beginning in the fall.

“I would be weary of buying tickets online from anywhere,” True North spokesperson Scott Brown said. “We do know of people who have been burned.”

Brown says a ticket exchange website will be set up in a few weeks to accommodate fans looking to score seats.

“Anything else is extreme buyer beware.”

Similar situations have been confusing some fans outside of the city who are trying to purchase official Jets merchandise. Since the logo was unveiled on July 22, hats, T-shirts and other Jets-related gear has been flying off the shelves at record pace. That same day, the Jets Gear store located inside MTS Centre was dealing with line-ups several blocks long.

NHL-authorized outlets, such as River City Sports, Royal Sports, Pro Hockey Life and Sport Chek are just a few locations where Winnipeggers can feel assured they’re purchasing legitimate merchandise. A percentage of all sales eventually finds its way back to the team, as well.

With such enthusiasm over a re-energized and coveted brand, it’s definitely wise to double check the outlet you’re dealing with, whether it be shelling out thousands of dollars for supposedly legitimate game tickets, or clothing bearing the new logo. A quick search on such websites as eBay and Kijiji turned up a handful of carefully-recreated Jets items, including jerseys, which won’t be available publicly until the players themselves begin wearing them.

The Better Business Bureau of Manitoba warns consumers to be diligent in their purchasing decisions, especially around hot commodity items like sports memorabilia.