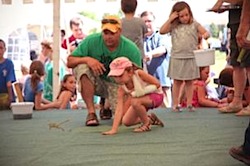 There’s just something about a frog-themed festival that brings out people in droves each year to St. Pierre-Jolys.

Organizers of the annual Frog Follies and Agricultural Fair said Friday attendance saw a 33% increase this year over the span of the four-day festival, which ran July 14 to 17.

This year’s success is being contributed to the level of participation from the community, including the St. Pierre Bible Fellowship Church who organized the children’s tent.

The Canadian National Frog Jumping Championships were won by Mark Duddridge with his frog 3 Musketeers 1. RMB Plumbing took the business category with their frog, Turbo Flush, and the VIP event was won by Mark, and his handler Greg Fehr, mayor of Niverville.