Home » News » Metro Winnipeg Getting into the ‘Blue and Gold’ Spirit

Metro Winnipeg Getting into the ‘Blue and Gold’ Spirit 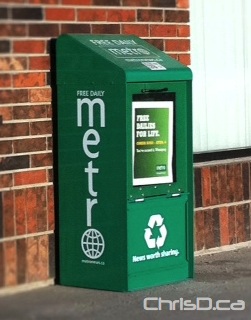 To show support for the Winnipeg Blue Bombers this season, Metro Winnipeg has launched a promotion to change the newspaper’s masthead from green and white to blue and gold.

The temporary colour change will come into effect on September 2 and 9 if the newspaper gets 1,000 “likes” on their Facebook page by August 31.

The promotion is in preparation for when the Blue Bombers face the Saskatchewan Roughriders at the Labour Day Classic and the Banjo Bowl.

“Leading up to these two big games, I knew we had to do something different because we have such a competitive rivalry,” said Managing Editor Elisha Dacey. “I thought sporting the BLUE & GOLD before the games would be a great way for Metro to engage the community and rally our (already) loyal football fans.”

Winnipeggers can follow the progress of Facebook likes every day in Metro Winnipeg, and on MetroNews.ca with a daily “like-o-meter”.