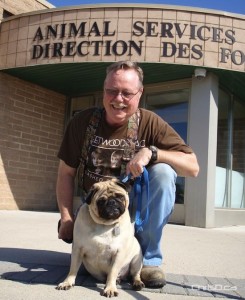 Joseph H.'s dog, Shylee, was impounded as a stray, but was returned to her owner for free because she was licenced. (CITY OF WINNIPEG)

The City of Winnipeg is tightening the leash on pet owners who don’t licence their dogs.

Beginning September 1, a zero-tolerance dog licencing policy will go into place, subjecting those who choose not to license their pooch with a $250 fine, plus court courts. Further costs will be dished out if a dog is impounded by Animal Services, such as impound and boarding fees.

The city is mimicking its policy after the City of Calgary’s zero tolerance policy on the issue, which has been in effect for 15 years. Calgary’s policy has resulted in a 90 percent dog licencing compliance rate, while Winnipeg is estimated at 40 percent.

Non-licenced dogs become property of the city after five days, while dogs who are licenced are held for 10 days at Animal Services.

Dog licences cost $27 a year for spayed/neutered dogs, and $62 for others. Residents can purchase a two-year licence and receive a 10% discount in the second year. Dog licences are available at Winnipeg.ca or by calling 311.