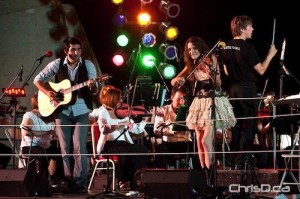 This year’s River Barge Festival at The Forks won’t necessarily be on a floating barge due to high river levels, but that shouldn’t dampen the array of activities planned.

Beginning tonight, the three-day festival under the canopy will include a diverse offering of musical programming, including a much anticipated performance from the Winnipeg Symphony Orchestra.

Tonight is a “Franglish” mashup featuring the Justin Lacroix Band and Red Moon Road, followed by the WSO as headliners. Saturday is dubbed “Sirens of Song,” showcasing an all female-led lineup featuring Jess Reimer, Little Miss Higgins, and Melissa McClelland. Sunday kicks off at noon with the Manitoba Stars Attractions Talent Showcase, wrapping up with the salsa sounds of Son Urbano.

The festival runs until Sunday.