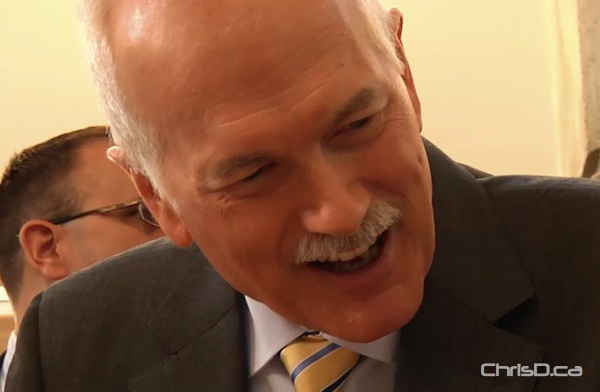 NDP leader Jack Layton died Monday, just weeks after taking a leave from the reigns of his party to battle a new form of cancer.

“We deeply regret to inform you that The Honourable Jack Layton, leader of the New Democratic Party of Canada, passed away at 4:45 am today, Monday August 22. He passed away peacefully at his home surrounded by family and loved ones. Details of Mr. Layton’s funeral arrangements will be forthcoming.”

Layton planned on returning to the House of Commons for the start of the new session on September 25.

On July 25, he stepped aside after appearing frail at a news conference to announce his new diagnosis. Quebec MP Nycole Turmel was selected as interim leader of the party days later.

Prime Minister Stephen Harper issued a statement Monday, which read in part, “I was deeply saddened to learn this morning of the death of Jack Layton. When I last spoke with Jack following his announcement in July, I wished him well and he told me he’d be seeing me in the House of Commons in the Fall. This, sadly, will no longer come to pass.”

Layton passed away at his Toronto home at the age of 61.

Manitobans who want to sign a book of condolences can do so at the Manitoba legislature until Monday, August 29 between 8 a.m. and 8 p.m. daily.

Jack Layton tweeted this last message from his account on July 25, 2011.