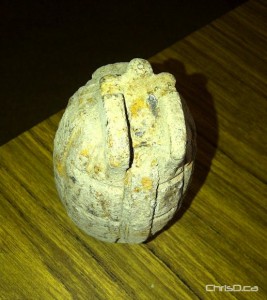 An apparent live hand grenade was brought to the Portage la Prairie RCMP detachment on Tuesday, forcing the evacuation of the building. (RCMP HANDOUT)

Portage la Prairie RCMP were forced to evacuate their detachment Tuesday afternoon after a man brought in what appeared to be a live hand grenade.

RCMP say a 43-year-old area man was tilling soil on his rural property when he came across the grenade. He brought it to police, who discovered the device to still be active.

Members of the 17 Wing Explosive Disposal Flight came in from Winnipeg to remove the device. The old and rusty grenade will be destroyed at a remote location.

RCMP are reminding the public that if they discover any military ordinance, ammunition, or explosives to leave it in place and do not handle it. Notify RCMP or your local police agency immediately and they will arrange disposal.

The detachment was evacuated for about 90 minutes at 3 p.m.