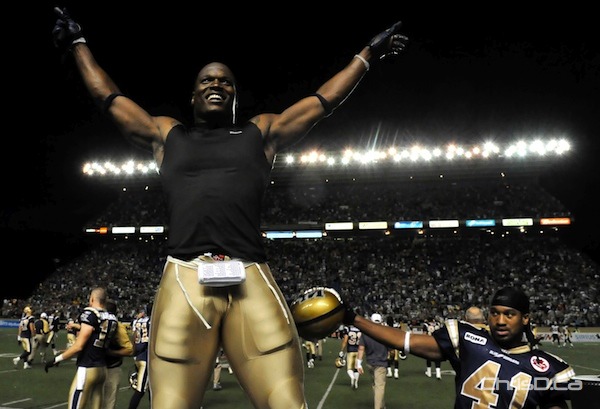 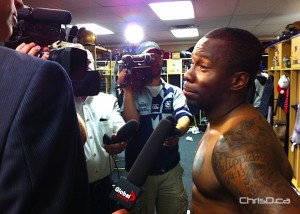 WINNIPEG — When the trash talking subsided — by both players and a certain coach’s wife — it was finally time to play football Friday night. The Winnipeg Blue Bombers slipped past the Hamilton Tiger-Cats 30-27 in front of an extra-packed Canad Inns Stadium.

Winnipeg (7-1) will remain atop both the CFL and East Division heading into the Labour Day Classic next week in Regina.

Despite suffering from repeated slow starts this year, the Bombers were fortunate to be tied with the Tabbies at the half (17-17), as the first two quarters were strewn with missed assignments and costly penalties. Winnipeg was charged with eight penalties (65 yards) in the first half, while the offence was forced to punt after two downs five times.

Buck Pierce was mediocre at best heading into the break, going 9/16 for 134 yards and a touchdown, as many of his misses were overthrown. His inaccuracy may have had something to do with the pressure provided by the Hamilton front — as Pierce was sacked three times in the opening quarter.

“They’re a good defence,” said Pierce who finished his day 19/34 for 293 yards, with two touchdowns and no interceptions. “They do a good job of getting pressure without blitzing. We made adjustments and I got the ball out of my hand quicker.”

The Winnipeg defence needed some time to find their vaunted swagger Friday night — allowing quarterback Kevin Glenn and the Hamilton offence to gain 221 yards and two long passing touchdowns (49, 43) in the first half. There were flashes however, as Swaggerville ‘Mayor’ Odell Willis recorded a sack, while Jovon Johnson’s 67-yard pick-six gave Winnipeg the game’s opening score.

“We (weren’t) on the same page a little bit,” said Willis of the first half. “We held up, and the offence came on and bailed us out. Once we got the confidence, we fed off them. Normally they feed off us — we fed off them.”

On the second half’s first play from scrimmage, Hamilton’s Kevin Glenn hit Chris Williams for a streaking 64-yard catch-and-run down the sideline that would’ve been a momentum shifting major if Williams didn’t fumble within inches of the goal line — thanks to Joe Lobendahn.

“The coaches preach –– always run to the ball. (At the start of the play) I was far behind,” said a chuckling Lobendahn. “I was about 20 yards behind the play. You just never quit, and things happen.”

Buck and the Bomber O really began clicking on their second possession of the third quarter, putting together a 9-play, 72-yard drive that ate up five minutes of clock and ended with a 27-yard Justin Palardy field goal, giving Winnipeg a 20-17 lead.

Hamilton responded immediately with an 85-yard touchdown drive that was capped by a Quinton Porter plunge after Jonathan Hefney was called for pass-interference, putting the Ti-Cats on the Bomber doorstep.

Early in the fourth, a 39-yard Justin Medlock field goal made it 27-20 Hamilton.

Winnipeg tied the game two minutes into the final frame with a lightning quick 75-yard drive that started with Pierce finding Terrence Edwards for a 53-yard grab before he found him again three plays later for a 12-yard touchdown.

Just as the game’s official attendance was announced — an absolutely jam-packed 30,338 — the deafening crowd noise became a measurable factor when the Hamilton offence took a 10-yard illegal substitution penalty.

The Ti-Cats were forced to punt, leading to another clock-eating 9-play, 65-yard Winnipeg possession. Palardy’s 21-yarder gave Winnipeg a 30-27 lead with just over six minutes remaining.

Swaggerville took the reigns from there, shutting the Hamilton offence down. The league’s No. 1 defensive unit finished forced three Ti-Cat turnovers, while Winnipeg committed none.

“We faced what I think is one of the better teams in the Canadian Football League, and we found a way to win,” said head coach Paul LaPolice. “You’re never going to be a dominating team week in and week out when you play a veteran team with a veteran quarterback, veteran receivers, (and) good players. That’s the name of the game — to get the two points.”

Following the game, the Blue Bombers announced the unfortunate passing of former chairman Ken Hildahl, who died suddenly on Friday. He was 61.

“Ken had very strong ties to the Blue Bomber family, and was a truly dedicated and committed individual who poured his heart and sole into this organization,” said Bomber president Jim Bell in a statement.

Hildahl spent 10 years on the Blue Bombers’ board of directors, including five years as the board chair. Most recently, Hildahl served as president and CEO of the Manitoba Liquor Control Commission, a role he assumed in 2009.