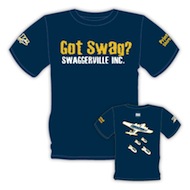 A handful of Winnipeg Blue Bomber players will hold a “Swaggerville” autograph signing at the Bomber Store this afternoon.

The first 200 fans who spend $50 at the store will receive a limited edition promotional Swaggerville T-shirt.

The Blue Bombers travel west for their next game where they’ll meet the Saskatchewan Roughriders on September 4.