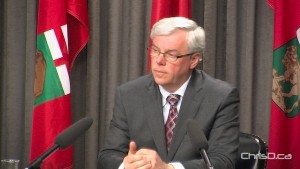 Manitoba Premier Greg Selinger on Tuesday released the NDP’s vision for the province over the next four years.

During a campaign event at the University of Winnipeg, Seliger said his party would build an even better future for Manitoba families.

“I have never been more optimistic about Manitoba,” Selinger said. “With more people working than ever before, housing values on the rise, and more young people choosing to stay in Manitoba and build a future than ever before, now is the time to keep building, not turn back.”

Later this afternoon, Progressive Conservative leader Hugh McFadyen will launch his party’s campaign at the Viscount Gort Hotel in front of about 400 supporters. The rally is set for 5:30 p.m.