The Progressive Conservatives kicked off their campaign Tuesday evening to the cheers of roughly 400 party supporters. 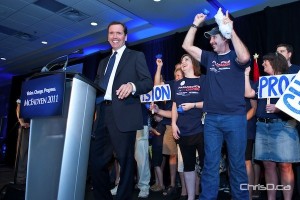 Leader Hugh McFadyen said little in the form of policy, but did speak during the 45-minute rally to energize the crowd at the Viscount Gort Hotel.

An announcement on one of McFadyen’s promises — to boost health care by adding additional doctors and nurses — is expected soon.

The Conservatives have already won the support of paramedics, which isn’t surprising considering one of the party’s pledges is to add more ambulances to Manitoba roads.