Aviation Museum Admission Lowered to a Toonie on Monday 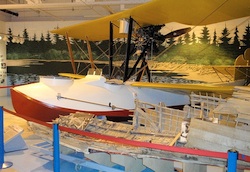 Looking for something to do on Labour Day Monday? The Western Canada Aviation Museum is lowering admission to $2 between 12 p.m. and 5 p.m.

Currently showing at the museum is the “Secret Agents, Spies and Moon Planes” exhibit, which highlights a local connection featuring two lesser-known Winnipeg “spies” who were parachuted into France and ultimately captured by the Nazis.

Frank Pickersgill (Winnipeg) was a freelance journalist who joined the newly-created Canadian Intelligence Corps in 1942. Fluent in German, Latin, Greek and especially French, he was loaned to the SOE. Francois Deniset (St. Boniface) studied history and economics in preparation for a career as a Foreign Service Officer. Two days before war was declared, Deniset joined the Royal Canadian Artillery where he was recruited by the SOE to be trained as an arms instructor.

Members of the museum get in for free.