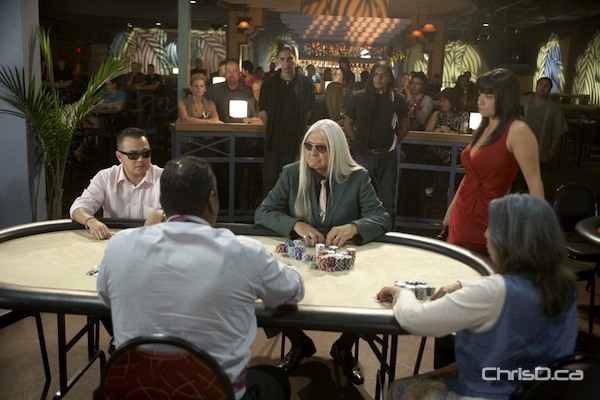 Season three of the locally-made television series “Cashing In” will make its premiere on APTN on Wednesday.

The original drama exposes the high-stakes, winner-takes-all world of First Nations gaming. The half-hour show is set on the fictional Stonewalker First Nation in southern Manitoba.

In season one, the North Beach Casino is purchased by Mathew Tommy, a ruthless casino mogul who plans to make it the jewel of his empire crown. With business venture and country living more complicated than initially thought, season two ends with Mathew being gunned down in his own casino.

Season three opens with the gaming empire now in the hands of his son. As questions emerge about whether Justin Tommy can cut the deck, Mathew’s past continues to surface. To top it off, John Eagle is planning to wed Liz McKendra, who was Mathew’s top executive before Justin fired her.

APTN will air seven new, half-hour episodes, which were shot last fall in Winnipeg, and rural locations in and around Bird’s Hill, Selkirk, Lockport and Scanterbury, Manitoba.