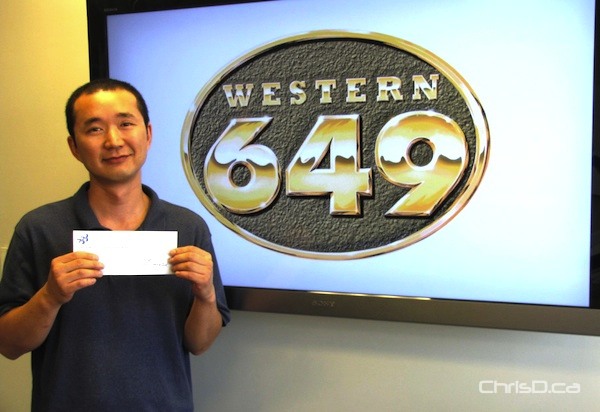 Byung Cho holds up his cheque after winning the Western 649 draw on August 27. (WCLC / HANDOUT)

Winnipeg has a new millionaire after a local man won a recent Western 649 draw at his own convenience store.

Byung Cho purchased a $28 ticket at Mak Milk on Talbot Avenue August 27 and found himself the winner the following morning after arriving back at work.

“I just smiled,” Cho said in a news release recalling his win.

No one else was in the store when Cho discovered his new fortune, but when his sister later arrived, she didn’t believe him.

“So I checked them on the terminal,” Cho said. “I called my mom to tell her, she was excited too.”

Because Cho owns the store where the ticket was won, he was subjected to extra questioning from the Western Canada Lottery Corporation. No discrepancies were found and Cho received his cheque earlier today.

As for what he’ll do with the money — “I want to put it in the bank and take time to think about it.”