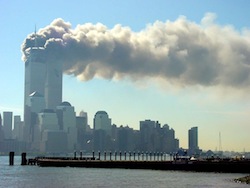 Winnipeg’s James Richardson International Airport marked the upcoming 10th anniversary of the 9/11 terrorist attacks during a short ceremony on Friday.

In conjunction with the U.S. Consulate, the airport was recognized for taking in 1,500 passengers from diverted flights on September 11, 2001. Seventeen aircraft were accommodated, including 14 domestic and three transborder flights diverted.

“Ten years ago, the community came together to assist unexpected visitors,” said Barry Rempel, president and CEO of Winnipeg Airports Authority. “This is an opportunity to once again thank airport employees, Goldwing volunteers, military personnel, hotel and transportation providers and others who offered a helping hand during this event.”

U.S. Consul Tim Cipullo said the anniversary is a chance to recognize the hospitality airport staff provided to hundreds of U.S. and international travellers.