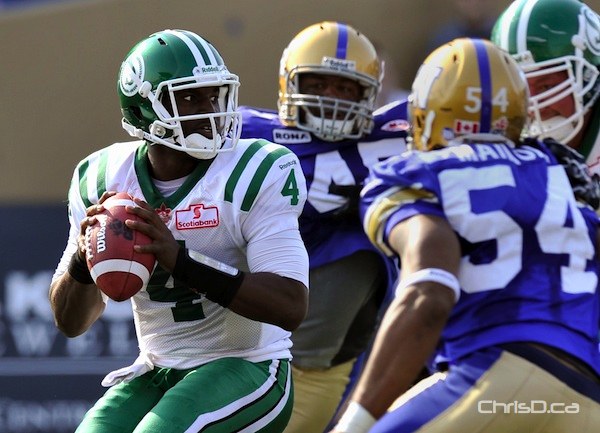 Saskatchewan Roughriders quarterback Darian Durant (4) makes a pass against the Winnipeg Blue Bombers during the first half of their CFL game at Canad Inns Stadium in Winnipeg on Sunday, September 11, 2011. (FRED GREENSLADE / REUTERS)

WINNIPEG — Thousands of banjo-plucking Rider fans packed into a sold-out and riotous Canad Inns Stadium for the 2011 Banjo Bowl on Sunday afternoon — and they will head back west with a smile. The West Division cellar-dwelling Saskatchewan Roughriders clobbered the Winnipeg Blue Bombers 45-23, improving to 3-7 on the year, while the East Division leading Blue and Gold fall to 7-3.

Swaggerville’s second-straight rout at the hands of Riderville is a tough pill to swallow simply because of the sheer amount of avoidable mistakes made.

“You can’t be successful in any league when you do that,” said Winnipeg head coach Paul LaPolice of his team’s six turnovers.

Saskatchewan trailed 10-0 through one quarter of play before turning it on and scoring 24 points in the second.

The momentum seemed to take a drastic swing when Roughrider head coach Ken Miller called a fake field goal late in the first half. The resulting first down set up a Weston Dressler 27-yard touchdown catch on the following play.

Rider quarterback Darian Durant finished his day 14/27 for 231 yards and 4 touchdowns, including two to Chris Getzlaf (34, 13), who also had a pair of majors in the Labour Day Classic in Regina a week earlier.

Rookie Saskatchewan defensive back Craig Butler had a career afternoon. The 22-year-old took advantage of several Winnipeg miscues, grabbing a pair of interceptions, a forced fumble, a sack, and six tackles.

Pierce, who went 21/33 for 287 yards and no touchdowns, took quite a licking throughout the afternoon. He returned in the third quarter with a protective flak jacket after favouring his ribs in the first half.

When asked if his punishment contributed to the sputtering offence, the signal caller would not place outside blame.

“I’m putting it on myself,” said Pierce. “I didn’t play anywhere up to my ability.”

Third-year backup Alex Brink came in late in the fourth and found Terrence Edwards for a 9-yard touchdown with less than a minute to play, but the seven points will only help the score appear less drastic in a game that was utterly dominated.

“We got to get to get our spark back,” said the veteran Edwards. “We did come out fast. It was one of our goals, but we have to do it for sixty minutes. We didn’t. We’ve got to come back next week against the champs — next week is very important.”

“I don’t want to say that two losses is not a big deal in this room,” said LaPolice. “It’s a huge deal for us, but I have to educate our players that you just have to go back and keep playing. I don’t know if it’s a levelling off, but we need to play better.”

With eight games remaining before playoffs, Winnipeg now travels to Montreal to take on the 6-4 Alouettes on September 18. A third straight Winnipeg loss will leapfrog Montreal into the East Division’s top spot.