Basketball Star Steve Nash Holding Clinic at U of M 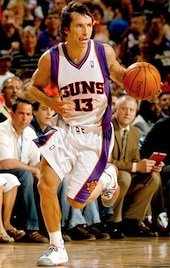 Basketball star Steve Nash is in Winnipeg today to receive the 2011 International Award from the St. Boniface Hospital Foundation. Nash, a two-time NBA MVP, will get the honour at a gala dinner.

But before he puts on a suit, Nash will hit the basketball court at the University of Manitoba.

Nash will join Manitoba Bisons and University of Winnipeg Wesmen teams along with a select group of inner-city kids for a one-hour clinic.

The clinic — from 1:30 p.m. to 2:30 p.m. — will be held at the Investors Group Athletic Centre on the U of M’s Fort Garry campus. Admission is free and open to the public to watch.

Following the clinic, Nash will speak to players and audience members on the importance of nutrition in an athlete’s life amongst other topics.

Due to time constraints, Nash will not be signing any autographs while at the university.

UPDATE: Mayor Sam Katz will present Steve Nash with the key to the city at 11 a.m.