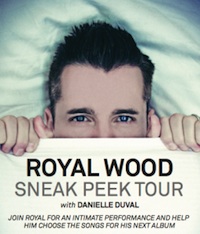 Wood’s “Sneak Peek Tour” will be an intimate way to debut new tracks for consideration on his new album before venturing out on his cross-Canada trek. Fans are encouraged to share their thoughts after the show on Facebook and Twitter to tell Wood which songs should make the cut.

The tour will also be the only place where fans will be able to get their hands on Wood’s most recent release, “The Cover Sessions EP”.

Tickets are available at the WECC, Ticketmaster, Music Trader and the Winnipeg Folk Festival Music Store.