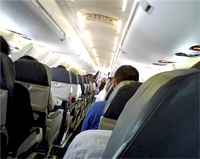 The site published a list of the 20 most popular Canadian and U.S. border airports and ranked them based on the average airfare of flights departing during the month of August 2011. Factors included domestic and international destinations, which showed varying prices by region.

“Airfares are a little like real estate,” said the site’s editor Lauren Sullivan. “What you pay is determined, in many ways, by where you live or the location you want. When planning a trip, it’s key to know how your departure or destination point stacks up. If you have the flexibility to try a different airport, especially a U.S. border airport, you may see a payoff.”

The cheapest Canadian departure location on the list was Kelowna, B.C. at $415. The most expensive was St. John’s, Newfoundland at $593.