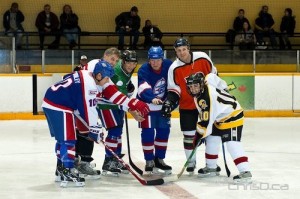 The Hanson Brothers from the movie “Slap Shot” will be in Winnipeg today taking part in a charity hockey game.

The Winnipeg Police Service Patrolmen Hockey Club will face the brothers as part of the Battle of the Badges Charity Hockey match at the St.James Civic Centre. Also participating will be the Emergency Service and Celebrity All Stars, featuring Winnipeg Jets legends and NHL alumni.

Winnipeg school patrols will be given free entry to the game as one of their various rewards for their dedication and service to their schools and community.

Proceeds from the event will benefit the Amadeus Steen Foundation.