Blue Bomber Fans Given Priority for Tickets in New Stadium

An artist's rendering of the future home of the Winnipeg Blue Bombers at the University of Manitoba. (HANDOUT) 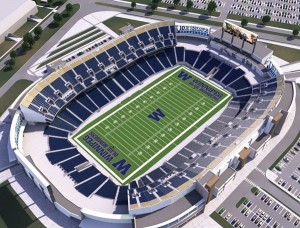 A bird's-eye view of the future football stadium at the University of Manitoba. (HANDOUT)

The Winnipeg Blue Bombers unveiled additional details of its new football stadium currently under construction at the University of Manitoba on Wednesday, including season ticket information.

The football club announced its many stadium amenities, as well as ticket pricing for its season ticket holders under the Stadium 2012 Season Ticket Transfer Program.

All 21,155 season ticket holders will have first dibs on seats in the new stadium, similar to the program put in place to transition Manitoba Moose ticket holders for the 2011-12 NHL season.

One of the main points will be affordability for all fans, with the cheapest season tickets starting at $196.95 (P7 level). Pricing is broken down into multiple categories and includes all taxes and associated fees. 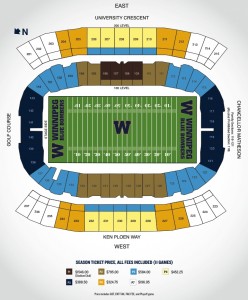 Current season ticket holders must secure their intent for a 2012 season ticket with a $50 deposit by October 24. In the second phase of the program, fans will have between November to March to select their actual seats. Season tickets for the general public will go on sale in April 2012.

Fans can view their seats under the club’s new Virtual Venue feature on BlueBombers.com — a 3D, 360-degree option that allows fans to see exactly where they’ll be sitting and what kind of view is available.

Season tickets go on sale to the general public in April 2012.

Stadium amenities at a glance:

All 46 luxury suites, the two suite level Blue and Gold Suites and the 100-level loges are already sold out. Interested parties can be added to a waiting list at [email protected].

Construction of the 33,500-seat facility is currently on schedule, officials said. If needed, seating will be able to accommodate 40,000 fans for larger events, such as the Grey Cup or concerts. The Manitoba Bisons football team will also use the stadium as their new home field.