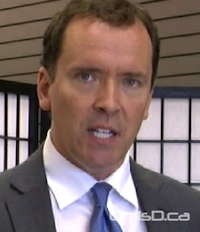 While in Eriksdale on Tuesday, party leader Hugh McFadyen said the beds would not only service that community, but Arborg and Ashern as well.

“Communities and families in the Interlake region have been dealing with this record of NDP neglect for years,” McFadyen said.

McFadyen criticized the ruling NDP, saying the government promised $200 million to build personal care home beds but had no plan for how the funding would be allocated.

A community organizer with the Lakeshore Hospital Guild was also present at the PC’s funding announcement.