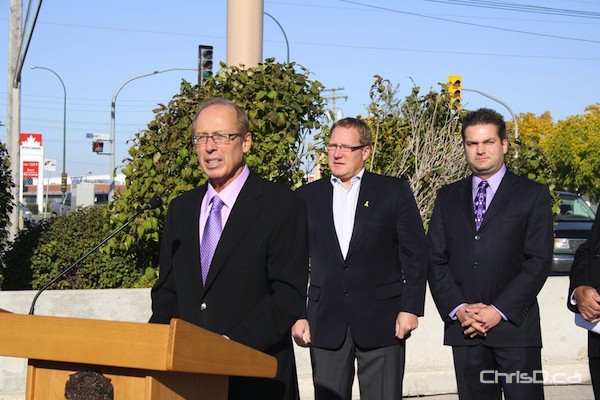 Winnipeg Mayor Sam Katz called on the provincial candidates Tuesday to make infrastructure spending a priority in the election.

Joined by the president of the Association of Manitoba Municipalities, Katz said the campaign promises so far neglect basic infrastructure investments.

“We’ve seen millions of dollars being promised for a variety of interests from those seeking office this election, but if you actually want to do something positive to improve the quality of life for our citizens, then step up and do what’s right and provide municipalities with a real funding source to address the priorities of the people who are electing you,” Katz said.

Speaking at the corner of St. James Street and Ellice Avenue, Katz and AMM president Doug Dobrowski highlighted the need for infrastructure improvements.

City Council asked the province earlier this year for one point of the existing provincial sales tax to help fund road repair. Municipalities were previously promised one percent, which would amount for $238 million in spending.