Lay’s the Official Potato Chip of the Winnipeg Jets 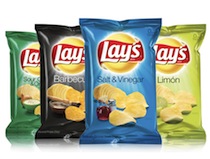 Lay’s potato chips is about to see an increase in sales from consumers craving the snack treat, as the company announced Monday it’s the official chip of the Winnipeg Jets. And like anything associated with the Jets, it turns to gold.

Lay’s, part of PepsiCo Foods Canada, says teaming up with the Jets was a no-brainer.

“Teaming up with the Winnipeg Jets was a natural and obvious fit for us – two brands who value hometown pride and enjoy supporting Canadian communities,” said Jason McDonnell,  vice-president of marketing.

Lay’s plans on launching a year-long Hometown Heroes initiative, which recognizes and celebrates local individuals who make a positive impact on their community. Nominations can be made on the Lay’s website starting on Wednesday.