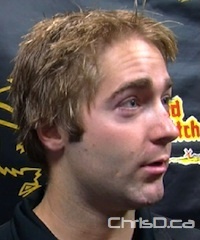 The Manitoba Bison men’s hockey team has named its captains for the 2011-12 Canada West season.

For the second time, forward Mike Hellyer will be bestowed the title of team captain, while alternate captains will be defenceman Dane Crowley and forwards Chris Benias and Tyler Dittmer.

“All four of these veteran players reflect the values of integrity, hard work, respect and honesty that is the foundation of Bison Hockey,” said head coach Mike Sirant.

Hellyer is a fifth year forward and scored seven goals last season — good for 11 assists for 18 points, placing him sixth in team scoring and tied for 28th in Canada West.

“The core guys that are coming back are a really good group of guys. Expectations are really high,” Hellyer said on Tuesday.

The Bisons open their season on the road this weekend against the Calgary Dinos on Friday and Saturday. The Bisons continue their road games October 14 and 15 against Alberta, before returning home to open up the season at Max Bell Arena on October 21 and 22, where they will face Regina.