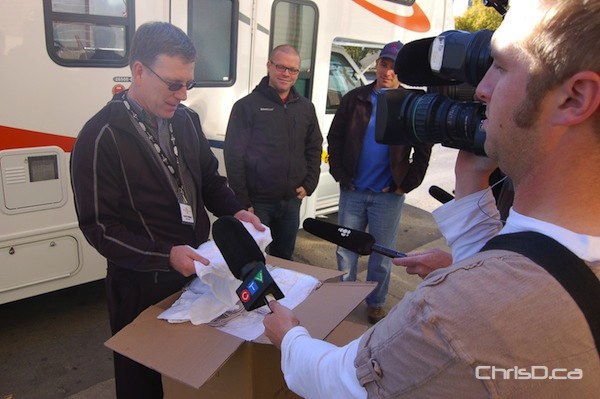 Siloam Mission will be on the receiving end today of a massive underwear donation from two men driving across Canada in an RV.

Brent King and Robb Price started GotGinch — a men’s underwear drive travelling the country to distribute 35,000 pairs of underwear to homeless shelters along the way.

Siloam Mission is the sixth stop on the tour by the two Calgary-based philanthropists and entrepreneurs.

The two began their third annual journey in Vancouver and will end up in Halifax once complete.

Spread out between 10 homeless shelters, each stop provides 3,500 pairs of underwear to the homeless population, many of whom are sometimes left without such a basic necessity.

The GotGinch drive will roll into 300 Princess Street at 10 a.m. To find out more about the initiative, visit DeliverGood.org.

Updated at 11 a.m. to add photo from the event.