Winnipeg Blue Bombers Are Beasts of the East No More 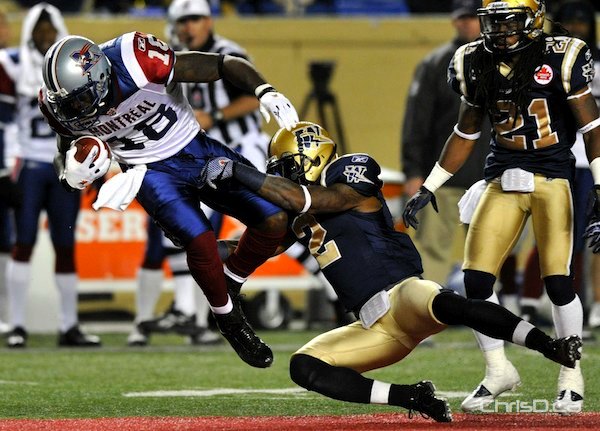 WINNIPEG — The Montreal Alouettes escaped with a 32-26 win over the Winnipeg Blue Bombers and moved into a tie with the Bombers at the top of the Eastern Division with an 8-5 record on Friday.

For the first time in over two months, the Bombers drop out of sole possession of first place in the East.

After trailing 29-6 at one point in the third quarter, the Bombers battled back and cut the lead to 32-26 and with 8 seconds left in the game, had the ball at the Alouettes’ one. But two quarterback sneaks from Alex Brink were unsuccessful and Montreal held on.

“I thought I was in on both of them, but it’s not my call,” said Brink. The replay showed that Brink looked very close to being in the end zone both times, but the referees ruled with the help of video review that the Alouettes made the stand.

“Certainly with two opportunities from the one, with the wedge which has been a very good play for us for two years, it’s disappointing to get stopped there,” said Bomber head coach Paul LaPolice.

If the Bombers could take a moral victory away from this one, it would be the great performances of backups Brink and running back Chris Garrett, who finished with 11 carries for 76 yards and a touchdown.

“When we broke training camp, (Brink) was the guy that was our 3rd string quarterback,” said LaPolice. “And he had a lot of yards against one of the better teams in the CFL, so that’s a positive.”

Brink finished 24 of 40 for 326 yards, a touchdown and two interceptions in his second career start.

It was certainly a better outing than Brink’s first CFL start last year — a 4 for 18 performance — but the quarterback doesn’t feel the same way.

“I feel just as bad about this start as I did my other start,” said Brink. “It’s a loss.”

Alouettes QB Anthony Calvillo showed no signs of a concussion that knocked him out of last week’s game against the Eskimos throwing for 335 yards and three touchdowns.

Things started well for the Blue and Gold. Brink looked solid on the Bombers first offensive possession completing a couple key passes and even running for a first down leading to a Justin Palardy 36-yard field goal which gave the Bombers a 3-0 lead.

But the potent Montreal offence came right back as Anthony Calvillo hit Jamel Richardson for a 59-yard catch-and-run down to the two-yard line before Dahrran Diedrick plowed into the endzone to give the Als the lead with 7:12 to play in the first quarter.

The Bomber defence played strong for the rest of the half, but with 49 seconds left, Brink was hit inside his own 5 yard line, prompting the ball to pop up into the air and fall into the hands of Alouette defensive end Anwar Stewart at the Winnipeg three-yard line.

Despite an unnecessary roughness penalty, the Als capitalized on the next play as Calvillo found Jamel Richardson for an 18-yard score and a 15-3 Montreal lead at the half.

Out of the half, the Alouettes picked up where they left off. Calvillo connected with Kerry Watkins and S.J. Green on Montreal’s next two drives for 12 and two-yard touchdown receptions, respectively, to take a 29-6 lead.

Some of the 30,447 fans headed for the exits as the game looked out of reach. And as the fans bolted, the Blue and Gold came to life.

Rookie linebacker Henoc Muamba picked up a James Green blocked punt and ran it back 52-yards for his first career touchdown to narrow the deficit to 29-13 after three quarters.

After three quarters of mediocre play, the Bomber offence finally clicked in the 4th. A 25-yard touchdown pass from Brink to Clarence Denmark cut the lead to 32-19 with a missed two-point conversion. The Alouettes were forced to punt on their next drive, and the Bombers drove down the field led by Garrett, who broke his biggest run of the game, a 32-yard touchdown, to cut the lead to six.

After a Terrence Edwards fumble with 1:44 left, the Bomber defence yet again made a stop and the offence got the ball back with 1:03 left but eventually fell one yard short.

“We were comfortable with what we were doing,” said Brink of the offence’s 4th quarter performance. “I saw everything really well and it’s just unfortunate. It’s heartbreaking.”

It won’t get any easier for the Bombers as they travel to Ivor Wynne Stadium in Hamilton next Friday to face the Hamilton Tiger-Cats (6-6).