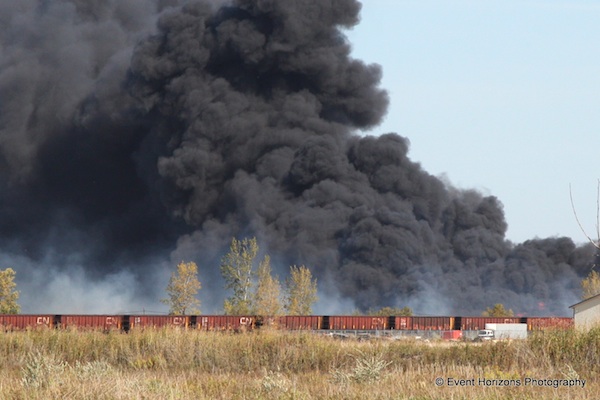 Smoke billows out from a fire in a Transcona industrial area near Redonda Street and Gunn Road on Saturday, October 1, 2011. (DAVID WILLIAMS / EVENT HORIZONS PHOTOGRAPHY) 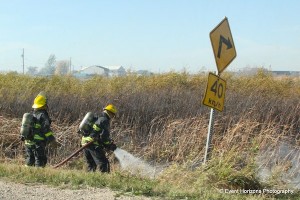 Firefighters put out hotspots in a ditch nearby where a large blaze started in Transcona Saturday afternoon. (DAVID WILLIAMS / EVENT HORIZONS PHOTOGRAPHY)

Large plumes of smoke occupied the skies over Transcona Saturday, as an industrial fire forced the closure of several roads in the area.

Winnipeg police say the blaze started at around 12:30 p.m., which forced them to close the area of Redonda Street and Gunn Road to vehicles and pedestrians.

Witnesses on the scene said flames reached about 40-feet high before fire crews were able to get a handle on the situation.

Businesses in the immediate area were also evacuated as a safety precaution, as high winds blew smoke toward nearby buildings and onlookers who had gathered.