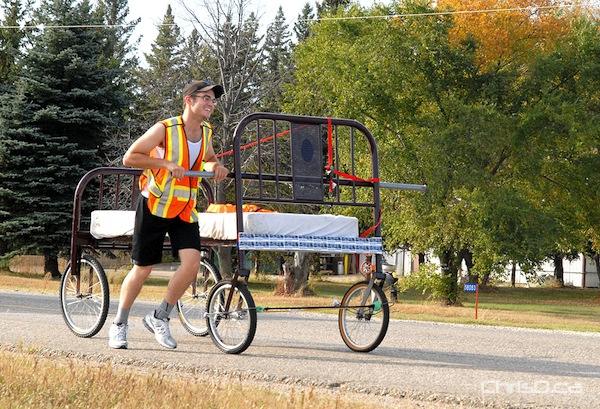 A student from the University of Manitoba pushes a bed near MacGregor, Manitoba on Saturday, October 1, 2011 as part of the annual 'Aggie Bed Push' in support of the Canadian Red Cross. (STAN MILOSEVIC / MANITOBAPHOTOS.COM) 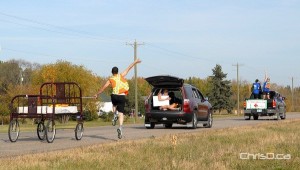 A convoy of vehicles travel east near MacGregor on Saturday as part of the annual 'Aggie Bed Push.' (STAN MILOSEVIC / MANITOBAPHOTOS.COM)

Students from the University of Manitoba set out on a two-day trek from Brandon to Winnipeg on Saturday while pushing a bed down the Trans-Canada Highway.

The 30th annual Aggie Bed Push is a fundraiser whose goal this year is to raise money for the Canadian Red Cross’ Manitoba Severe Weather Fund. The funds will support victims affected by this past spring’s flood.

Students from the Faculty of Agricultural and Food Sciences were encouraging motorists to pull over and make a donation.

The group got from Brandon to MacGregor on Saturday, and planned to get to St. Francis Xavier on Sunday. They are expected to arrive back at the U of M by Monday at noon.

Organizer Lisa Wiens says this year’s goal is to raise $5,000. Donations can also be made online at RedCross.ca/AggieBedPush.

← Previous: Local Website Hopes to Bring Out the Youth Vote Next: Hip-Hop Journalist to Lecture at U of W →
Tags: Canadian Red Cross | Charity | University of Manitoba