CONTEST: Win Tickets to the ‘After Burner Social’ October 9 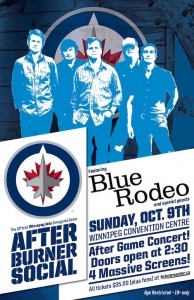 ChrisD.ca wants to send you to the After Burner Social on October 9, featuring Blue Rodeo and Keith and Renée.

The same day the Winnipeg Jets start the regular 2011-12 NHL season at home when they host the Montreal Canadiens, fans just down the street at the Winnipeg Convention Centre will be embracing the hockey spirit in their own way.

Doors open at 2:30 p.m. and four giant screens will simulcast the action from MTS Centre. Entertainment begins following the game.

Tickets are $35 at Ticketmaster or you can win them below. We’re giving away five pairs!

Contest closes Thursday, October 6, 2011 at 5 p.m. CT. Entries received after that will not be counted. One entry per person. Manitoba residents only, please.