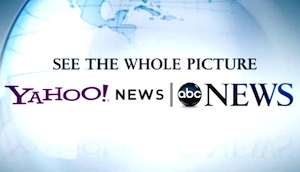 Yahoo! has partnered with ABC News in a content-sharing agreement, making the once powerful search engine giant to remain somewhat relavant in the Google- and Facebook-dominated era of the Internet.

The two companies announced the partnership on Monday, which will include stories and web videos from both properties.

Content will be redistributed on GoodMorningAmerica.com (now on Yahoo!) to reach 100 million users each month.

Original web video content will also be produced under the deal, such as “Newsmakers,” “Around the World with Christiane Amanpour” and “This Could Be Big.”

The agreement between both companies isn’t entirely new — both Yahoo! and ABC News have had a video-sharing agreement in place since 2005.