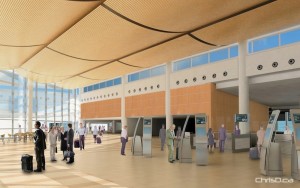 The departures area inside the new James Richardson International Airport. There are 32 common-use kiosks where travellers can check-in. (WAA)

The new air terminal at Winnipeg’s James Richardson International Airport will be buzzing on Saturday, but it won’t be from passengers arriving or departing.

Still scheduled to officially open in a few weeks from now (October 30), the Winnipeg Airports Authority will conduct public trials with the 1,300 participants who were picked to get a hands-on experience at the new airport.

The trials will ensure the new air terminal building functions as it has been designed, including systems, equipment, personnel and customer service.

Participants will be given a script where they will be asked to provide feedback following their experience. The trials, beginning at 8 a.m., are closed to the public and are only open to those who have previously registered and been confirmed for the day.

Senior members of Winnipeg’s art and design community helped narrow down the influx of artists, who responded to an expression of interest originally put out by the airport in 2005.

On Friday, the airport also announced it has been recognized as one of Canada’s Top 100 Employers for 2012.