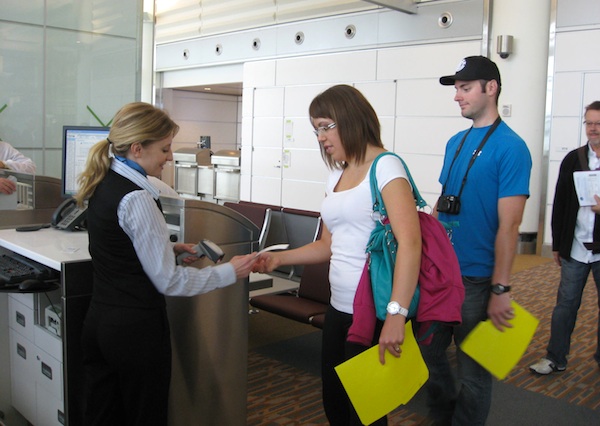 Volunteer participants board their mock flight on Saturday, October 8, 2011 at Winnipeg's James Richardson International Airport as part of a trial day to work out any kinks and provide feedback before the public opening later this month. (VINCENT LEE / CHRISD.CA) 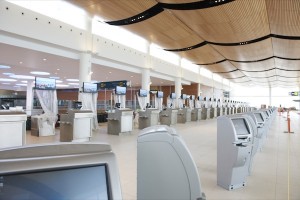 Thirteen hundred volunteers participated in airport trials at Winnipeg’s James Richardson International Airport on Saturday as part of the final testing phase before its grand opening on October 30.

More than 4,300 volunteer applications were submitted in July and 1,300 applicants were selected to test out the airport facility and take an imaginary flight.
Each participant was given a folder that contained a script to follow, including a fake name and destination. Within the package, trial participants also received as a gift a specially designed commemorative nickel coin of the airport. In addition, volunteers were asked to fill out a feedback form to make any prior adjustments to opening day.

The new airport terminal is very open and spacious, and significantly brighter than the current terminal boasting to be one of the ‘greenest’ in North America. It incorporates systems that minimize the use of energy and reduce greenhouse gases while maintaining a comfortable environment for passengers. Designed by master architect Pelli Clarke and prime architect Stantec, the new terminal facilities were designed to be open and transparent — reflective of the community.

“It gives a nice impression for visitors coming,” said Glenn Fruehm, one of the many participants at the trials. “It’s a great welcoming for Winnipeg,” added his wife Carrie.

“There is a lot of space and volume feel compared to the old terminal,” said John N. after his airport trial experience. “It’s easy to get around. (I’m) looking forward to take a flight out of this building.”

“It’s a simple layout (with) modernization of equipment, and the staff are really helpful,” said Stephanie and Pierre Dupuis, a couple en route to their fictional destination of St. Maarten.

The terminal has a lot of natural lighting with plenty of open space, and has two levels, with 11 contact gates and seven ground-loading gates. The view from any of the gates and lounge area is beautiful as it draws attention to the airfield and emphasizes the vastness of the open prairie sky.

Winnipeg’s new airport will be active on October 30 as soon as the clock strikes 12:01 a.m., with the first flights leaving for Toronto at around 5:30 a.m.

Volunteer participants board their mock flight on Saturday, October 8, 2011 at Winnipeg’s James Richardson International Airport as part of a trial day to work out any kinks and provide feedback before the public opening later this month. (VINCENT LEE / CHRISD.CA)

What’s new at the airport? (op-ed)

Swanky. That’s the first word that came to mind to describe the new James Richardson International Airport terminal. It’s bigger, brighter, and newer than the aging facility next door. “It’s like a real airport,” said one staff member showing me around, after months of only seeing the airport as a giant construction zone.

There are a number of blue lights, and skylights that certainly make the place brighter than the old terminal.

I think Winnipeggers and visitors to Winnipeg are going to be in for a real treat when they set foot in this new building. It’s quite modern inside, and it feels more organized — with a lot of open and functional space. This new design has also incorporated the new “technology traveller” with standing tables with charging stations to plug-in laptops and gadgets, and also free Wi-Fi available to all passengers. However, for some reason on the main floor, I wasn’t able to get reception with my phone, and when my colleague tried to call me (who was a mere feet away), my phone went directly to voicemail. Tweeting was also a problem on the main floor. On Level 2, reception was better and tweets, texts, and calls were easily made without issue.

If you’re like me — and book that really early morning flight to save cash — the first thing that you’re going to do is look for some coffee. Once things are operational, there will be three Tim Hortons (one at each end of Level 2 of departures, and one on the main level), as well as a Starbucks (Level 2).

It might sound strange, but I had to check out the washroom. In the men’s washroom at least, it’s quite big and the large stalls easily accomodate luggage. For all those winter travellers coming back from hot locations wearing shorts and T-shirts, there is a stall that is a changing room to change back into jeans and sweaters. According to my female colleague, the same goes with the women’s washroom as well.

As I was going through the motions of the airport trial, I noticed a lot of art installations that need to be mentioned. When you first walk in, there is a large glass sculpture called “Inside Ice.” Crafted by acclaimed Winnipeg artist Joel Berman, the sculpture appears like a floating iceberg. The art installation wasn’t completely finished, but apparently there’s still supposed to be light illuminating the glass sculpture at all times for additional effect.

Overall, this was a very positive experience, and I’m pretty happy that this airport is ready to go live.