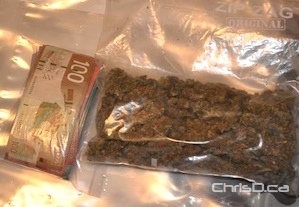 RCMP seized drugs and cash from a home in Gimli on October 5, 2011. (RCMP HANDOUT)

Manitoba RCMP have seized a quantity of marijuana, cocaine and cash from a home in Gimli.

A search warrant was executed on a residence October 5, leading police to the stash of drugs, which they say are valued at $2,500.

Charged are Kara Stoyanowski, 20, and Stephen Pearce, 31. Both suspects are from Gimli and will appear in court November 28.