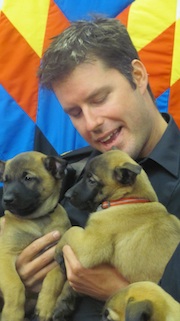 A Winnipeg police officer displays a group of newly-born puppies to the media on Thursday, October 13, 2011. (ASHLEY GABOURY / METRO WINNIPEG)

Winnipeg police introduced the world to a batch of its 11 new adorable puppies on Thursday as part of its canine breeding program.

The new litter of Belgian Malinois pups were born on August 27, and are made up of seven females and four males. The proud parents — Judge and Juno — are police dogs themselves.

The litter is the first since the breeding program was re-introduced in 2009 after a brief hiatus.

Since the program has been in place, 42 puppies have been bred over a period of six years. Many stay within the service, while other canines go to assist the Brandon Police Service and Manitoba Natural Resources. U.S. law enforcement agencies, including one from Salt Lake City, Utah, has also previously sought out the pups.