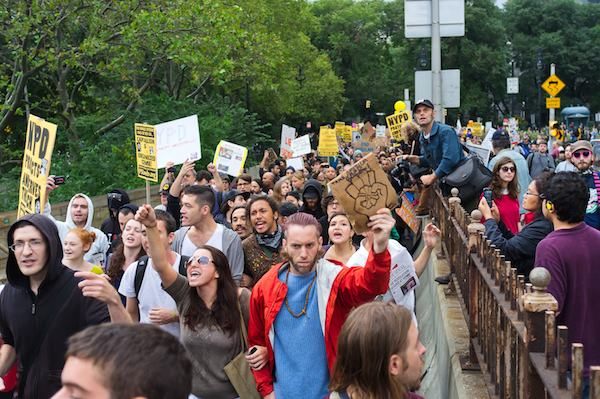 Approximately 2,000 people march to the Brooklyn Bridge in New York during an 'Occupy Wall Street' rally in the United States. (MAT McDERMOTT / FLICKR)

The massive protests that began in the United States several weeks ago to take a stand against Wall Street and the big banks have made their way north.

Several of the lingering protests are now planned for Canada, including one in Winnipeg on Saturday.

“Occupy Winnipeg” — similar to the Occupy Wall Street movement — is being organized by Peace Alliance Winnipeg and hundreds of people on Facebook.

The non-violent, anti-war demonstration is asking the public to join collectively under the banner of “Occupy Bay Street — Not Afghanistan.”

“We want to send the message to Stephen Harper that we reject the growing militarization of Canadian society, the wars in Libya and Afghanistan, the addition of overseas military bases and the expenditure of billions of dollars to pay for “stealth fighters” that have only one use — wars of aggression — while Canadian infrastructure and social programs crumble,” Peace Alliance Winnipeg said on its website.

The Winnipeg event will begin at 10 a.m. at the Manitoba Legislature, where a march will follow to Portage and Main at 11 a.m.