Home » Sports » Blackhawks Too Much for Jets in First Road Game

Blackhawks Too Much for Jets in First Road Game 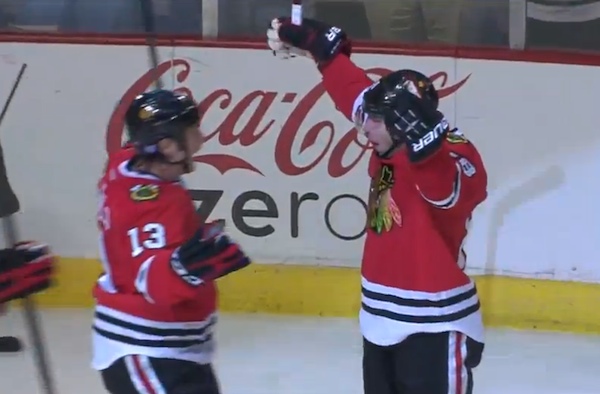 The Winnipeg Jets took off hot Thursday night, but eventually came back down to Earth, falling 4-3 to the Chicago Blackhawks in the re-incarnated franchise’s first road game of the 2011-12 NHL season.

Early second period goals from Marian Hossa and Dave Bolland made it 4-2 Hawks.

Late in the frame, Kyle Wellwood slipped a Ron Hainsey rebound past Chicago goaltender Ray Emery — a backhand between his legs that made it a one-goal game heading into the third.

The Jets rallied late, putting solid pressure on the Blackhawks, but Emery shut the door to seal the home-team victory in front of 21,175 fans at Chicago’s United Center.

Winnipeg’s Ondrej Pavelec looked solid at times, and shaky at others, stopping 28-of-32 shots on the night. While denying several quality Blackhawk chances, the Jets’ starter let in a pair of questionable goals in the second.

“He did some things well, and some things not so well,” said head coach Claude Noel of his 24-year-old net-minder’s performance. “I’d give him a six out of ten.”

The Jets (0-2-0) continue their search for the team’s first victory when they visit the Phoenix Coyotes (1-1-1) on Saturday, before returning to the MTS Centre to face the Pittsburgh Penguins (3-0-2) on Monday night.

See the boxscore and video highlights at NHL.com.