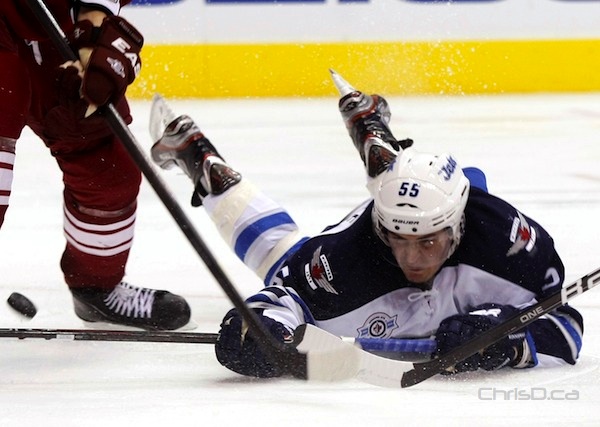 Winnipeg Jets centre Mark Scheifele dives for the puck against the Phoenix Coyotes during the third period at Jobing.com Arena in Glendale, Arizona on Saturday, October 15, 2011. (RICK SCUTERI / REUTERS)

The Winnipeg Jets will send home the thousands of fans that followed them to Glendale somewhat disappointed, as they fell 4-1 to the Phoenix Coyotes in front of 17,132 spectators Saturday night.

Midway through the first, the Coyotes made it a two goal deficit as defenceman Oliver Ekman-Larsson found a loose puck and wristed past Mason from the left hash.

Jets rookie Mark Scheifele began the second period on what could be argued as the top line with Andrew Ladd and Blake Wheeler, as Winnipeg bench boss Claude Noel shuffled his forward lines looking for some increased offence. The Jets looked lost in the Phoenix end, mustering a measly five shots on net in the opening frame despite three separate power-play opportunities.

Ekman-Larsson grabbed his second goal of the night on a point shot roughly five minutes into the second, making it 3-0 Phoenix.

A Ray Whitney power-play marker early in the third sealed the deal, as the Coyotes went on to a 4-1 victory.

The Jets remain winless on the season, and continue their search for that elusive first victory when they face the powerful Pittsburgh Penguins on Monday night at MTS Centre in Winnipeg.